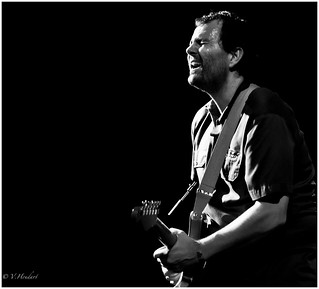 Frédéric is one of the young blues guitar players who emerged with the baby blues boom of the mid-nineties with artists such as Jonny Lang, Kenny Wayne Shepherd, Ainsley Lister, Julian Sas, Monster Mike Welch, ... The first recordings of the band were made when Fred was only 18 and largely influenced by SRV and Jimi Hendrix. As a result, the tone, touch as well as the vocals were not yet mature but they proved to be powerfull and authentic. Fred's guitar plays got enriched by many influences and artists and is now immediately recognizable among others as a contemporary mix of the three King's styles (Albert, BB, Freddie...). Fred plays a Fender Telecaster directly plugged into Fender and Matchless amps.

Cédric has been playing bass for decades and has been a member of different bands (Pizza Crushers, Superslinger) before joining Fred and the Healers in 2012. His tone is smooth but powerfull as he can really exploit the best of his Fender jazz bass. His signature is his great ability to bring soul and swing into the more heavy blues rock pieces while he always enjoys basic 12 bars walking bass lines ! Cédric plays a Fender Jazz or Fender Precision bass plugged into an Ampeg Amp. 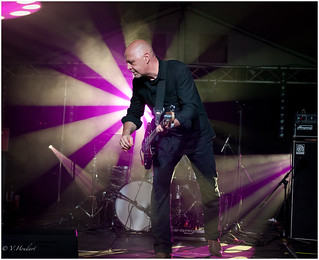 Nicolas has been the drummer of other bands (Pizza Crushers, Ugly Buggy Boys) before joining Fred and the Healers in 2012. Nicolas' main influences are to be sought in the blues rock bands of the 70's but one of the most fantastic aspects of Nicolas' drums play is the incredible communicative enthusiasm. And Nicolas feels also at home in this bluesband, mastering all the tasty patterns and fills of standard shuffles, slow blues and swings. Nicolas currently plays Ludwig drums. 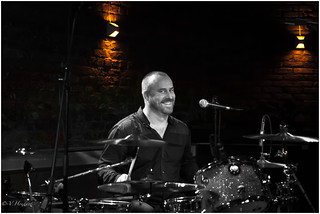 We do not have a full time manager or a full time booking agency - we're more DIY guys... However, we are advised by Frederic Maréchal from Cinderella Booking for the booking in large venues and festivals. We are also partnering with Pierre Failly (Bluesbox) for France and Germany. We currently have a deal with Team 4 Action for licensing and edition. They also help us a lot with promotion and for some important gigs.

We have been working with several talented sound and light engineers over the years. Depending on their availability, we are currently working with David Minjauw, Marc De Cock or ocasionnally Peter Soldan as sound engineers. We currently do not have a full time light engineer but have the chance to work with light designer and scenograph Ludovic Wautier for very important festivals and venues. Guitars and amps are maintained by Christophe Bodnar from Rockamusic - Namur. Drums are maintained by Sylvain Martha from Style Art Custom Shop. Our blueslady Danielle is in charge of the merchandising and mood...